A Brief History of Japan: Samurai, Shogun and Zen: The Extraordinary Story of the Land of the Rising Sun Jonathan Clements 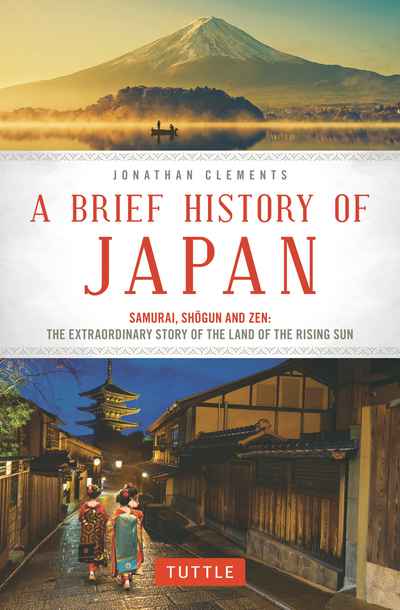 A Brief History of Japan: Samurai, Shogun and Zen: The Extraordinary Story of the Land of the Rising Sun
Jonathan Clements

This fascinating book tells the story of the people of Japan, from ancient teenage priest-queens to teeming hordes of salarymen, a nation that once sought to conquer China, yet also shut itself away for two centuries in self-imposed seclusion.

Stretching for nearly 2000 miles and encompassing almost 7000 islands, Japan has the fourth largest GDP and the tenth largest population in the world. Japan is a country of paradoxes, a modern nation steeped in ancient traditions; a democracy with an emperor as head of state; a famously safe society built on 108 volcanoes and an active earthquake zone. Despite a reputation for sprawling cities and cutting-edge technology, seventy-three percent of its land comprises uninhabited mountains and forests.

First revealed to the West in the Travels of Marco Polo, Japan was the legendary faraway land defended by the fearsome Kamikaze storm, and ruled by a divine sovereign. It was the terminus of the Silk Road and the edge of the known world, a fictional construct for European arts and crafts, and an enduring symbol of the mysterious east. In recent times, it became the powerhouse of global industry, a nexus of pop culture and a harbinger of post-industrial decline.

"To many, the title of Jonathan Clements's work would seem to be an absolute impossibility. Indeed, he uses that word in the preface to describe his task in telling a story that spans "millions of years." But Clements settles on "specific moments of transformation" in eleven chapters that address periods of Japanese history ranging from the legend behind Japan's formation to the "lost decades" that saw the country face a dwindling population and struggling economy. While the information Clements provides at some points may be overwhelming, A Brief History of Japan does come to life through the collection of images appearing in the middle of the book (such as depictions of prominent figures and photos of landmarks)." JQ Magazine