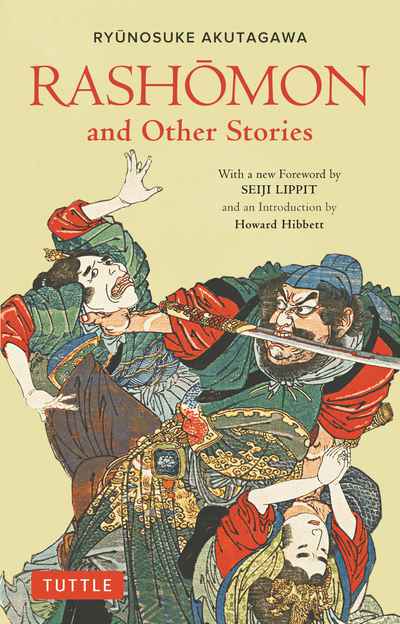 Ryunosuke Akutagawa rose from humble beginnings to become one of the most influential modern Japanese writers. He is known as "the father of the Japanese short story" and "Rashomon" is his best-known work. Presented with a new Introduction by Seiji Lippit, Rashomon and Other Stories is a collection of six popular works by the writer.

In a Grove: An iconic, contradictory tale of a samurai's murder near Kyoto told through three varying accounts. Rashomon: A masterless samurai contemplates a life of crime as he encounters an old woman at Kyoto's old Rashomon gate. Yam Gruel: A low-ranking court official laments his position all the while yearning for his favorite, yet humble, dish. The Martyr: During Japan’s Christian missionary era, a boy is excommunicated for fathering an illegitimate child but not is all that it seems. Kesa and Morito: An adulterous couple plots to kill the woman’s husband as the situation threatens to spin out of control. The Dragon: A priest concocts a prank involving a dragon but the tall tale begins to take on a life of its own.

The renowned Japanese director Akira Kurosawa based his iconic film Rashomon in part on Akutagawa’s story of the same name. While Akutagawa set much of his work in medieval Japan, he often employed themes familiar to modern readers. This has never been more apparent than in the striking stories in this volume, all of which resonate today as strongly as they did when they were first published.