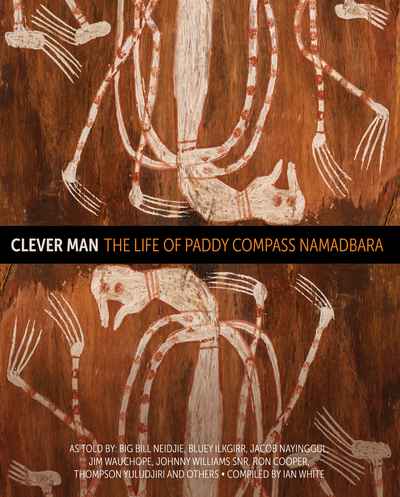 Clever Man: The Life of Paddy Compass Namadbara offers a unique perspective on the life and making of this Aboriginal Western Arnhem clever man or marrkidjbu.

Born at the end of the 19th Century when the Western world had scarcely touched Arnhem Land, Paddy Compass Namadbara acted as a healer for his countrymen and became a powerful and revered leader. Using his clever abilities and wisdom to nurture his community, he enabled the community to deal with the cultural and social changes of the encroaching Western world. He achieved the reputation of being one of the most powerful and clever of traditional marrkidjbu described as 'a proper number one champion!'

'Ian White's book offers a unique historical glimpse into an Aboriginal world on the cusp of change due to European incursion; it reveals an authentic insight into the special relationship of the 'clever man' with his Dreaming spirits and his process of initiation into the special knowledge of a marrkidjbu. White compiled his generalised account of 'Old Paddy', aka Paddy Compass Namadbara, from a number of West Arnhem people for whom Old Paddy had been a major figure in their lives. Recording various accounts, White's extraordinary work shows Old Paddy's special talent for healing the sick, exercising wisdom, and having visions in which he foresaw future events, for which he offered guidance and strategies for dealing with Western encroachment. Old Paddy's visions of the future foretold major events that were astonishing in the 1950s: Aborigines would get paid for their work, would own land and cars, and that money issues would bring division. All of his predictions came true. A rare insight into the world of the Dreaming, this book is unique and essential reading.' — Susan Greenwood, University of Sussex

'Forty years since the passing of Paddy Compass Namadbara, his legacy still looms large amongst the people of western Arnhem Land. Ian White has dedicated decades to recording the story of Namadbara's life and here he presents an extraordinary biography as told by the people of this region of the Northern Territory. The anecdotes about Namadbara's exceptional powers as a 'clever man' portray him as a community leader, teacher, sage, mystic, counsellor and healer. These are however more than just marvellous stories that defy explanation and evoke our wonder. The events of Namadbara's life, described by so many witnesses from both sides of the cultural divide, and collated so respectfully in this book, are an ongoing challenge to how various fields of the social and cognitive sciences should deal with such matters.' — Dr Murray Garde OAM, ANU