The Emu Who Ran Through the Sky: Book 2 in Tales from the Bush Mob Helen Milroy 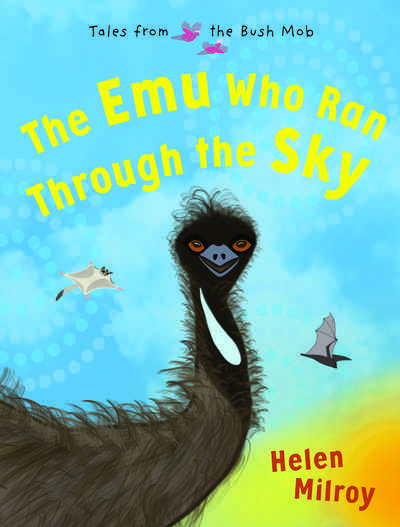 The Emu Who Ran Through the Sky: Book 2 in Tales from the Bush Mob
Helen Milroy

The emus couldn't fly, but did they sit around looking sad? No! They made sure everyone knew just how fast they could run. Except for poor Lofty...

Lofty, a young emu desperately wants to win a big emu race, but he is slow and clumsy — and his first race ends in disaster! But, Lofty realises there is another way to win the race. He enlists the help of his Bush Mob friends Eagle, Sugar Glider and Bat — who are all excellent fliers — to teach him to fly. But it is Bush Mob's inventor, Platypus, who designs the Feathery Paraglider that allows Lofty to win the day!

Tales from the Bush Mob is a series of books about the Bush Mob, a group of animals who work together to solve problems. The first in the series Willy-willy Wagtail, introduced Willy Wagtail and Gusto the Wind, who save the animals from a bushfire. Each book shares a rich landscape of characters and places, including Lofty the emu, Eagle, Sugar Glider, Bat, Platypus, Koala, Wombat, Kookaburra, Echidna, Kangaroo. These stories emphasise the value of respect for First Nations culture and country, as well as the importance of courage, perseverance and wisdom to bind communities together. The Emu Who Ran Through the Sky is the second book in the series.