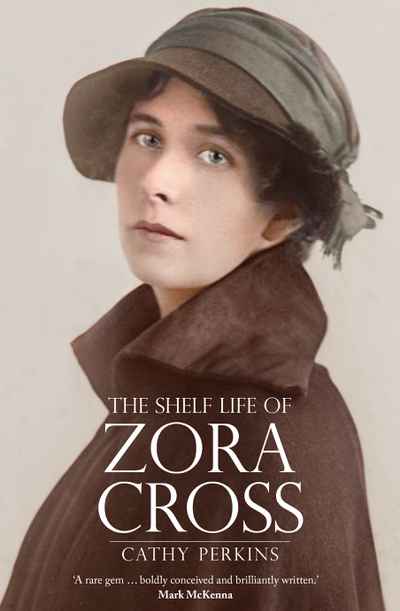 One of The Bookshelf's Best Books of 2019

'A rare gem. This is biography at its best: boldly conceived and brilliantly written. In spare, haunting prose Cathy Perkins rescues Zora Cross from oblivion, re-establishing her as one of Australia’s most remarkable literary figures. We see Zora’s life through the stories of her relationships with others. The person that emerge — possessed by an irrepressible hunger to write and to be published — is impossible to pin down. In Perkins’s hands, Zora Cross dances vividly before our eyes.' — Mark McKenna

Australian poet and journalist Zora Cross caused a sensation in 1917 with her book Songs of Love and Life. Here was a young woman who looked like a Sunday school teacher, celebrating sexual passion in a provocative series of sonnets. She was hailed as a genius, and many expected her to endure as a household name alongside Shakespeare and Rossetti. While Cross’s fame didn’t last, she kept writing through financial hardship, personal tragedies and two world wars, producing an impressive body of work. Her verse, prose and correspondence with the likes of Ethel Turner, George Robertson (of Angus & Robertson) and Mary Gilmore place Zora Cross among the key personalities of Australia’s literary world in the early twentieth century. The Shelf Life of Zora Cross reveals the life of a neglected writer and intriguing person.

‘This finely written biography fills a significant gap in the history of Australian women writers. Zora Cross is hardly a household name these days, but a century ago at the peak of her fame she very likely was, since Songs of Love and Life was that rare thing: a popular poetic sensation. The Shelf Life of Zora Cross now spells out her life story.’ — Peter Kirkpatrick

'The Shelf Life of Zora Cross is a beguiling narrative of a literary career that never quite matured. Cross’s chaotic life story is splendidly told by Perkins, who has explored many boxes of manuscripts, letters, and newspaper cuttings in the State Library of New South Wales. Zora Cross is allowed to speak for herself and is given an even-handed measure of admiration and understanding. This enigmatically titled biography conveys the pleasures of Cathy Perkins’s search for the many-faceted author.' — Brenda Niall, Australian Book Review

'This book sits alongside the work of Clare Wright, righting the wrongs and colouring in the half of the ledger that barely exists...Cross’s writing fell out of fashion and has been all but forgotten. We can only hope that this lively new volume, which shows precisely why we need university presses, will help to correct that.' — The Saturday Paper