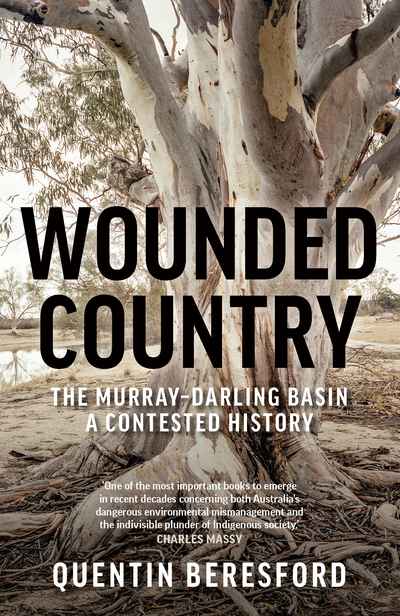 Like many Australians, I looked on with horror as images of a million dead fish swamped the media and consumed the news cycle. I resolved to dig deeper.

The Murray–Darling Basin is under threat. This vast and spectacular geographical region, covering one million square kilometres from central Queensland to South Australia, has been exploited for nearly 200 years. Soil erosion, sand drifts, dust storms, salinity, algal blooms, threatened native flora and fauna, the drying out of internationally recognised wetlands and steadily worsening droughts have repeatedly brought large parts of the Basin to its knees.

In Wounded Country, award-winning author Quentin Beresford investigates the complex history of Australia’s largest and most important river system. Waves of farmers exploited the region’s potential, with little consideration for the environmental consequences. Dispossession and marginalisation denied local First Nations people their lands and European settlers the Indigenous cultural knowledge to manage the Basin sustainably. Instead, we’ve had ‘nation-building’ irrigation schemes and agricultural enterprises promoted by politicians focused on short-term profits and a development-at-all-costs approach. Expert advice and warnings about long-term environmental effects have been continually sidelined.

We’re now at a point of reckoning. How can we save the once mighty Murray–Darling?

‘One of the most important books to emerge in recent decades concerning both Australia's dangerous environmental mismanagement and the indivisible plunder of Indigenous society.’ — Charles Massy