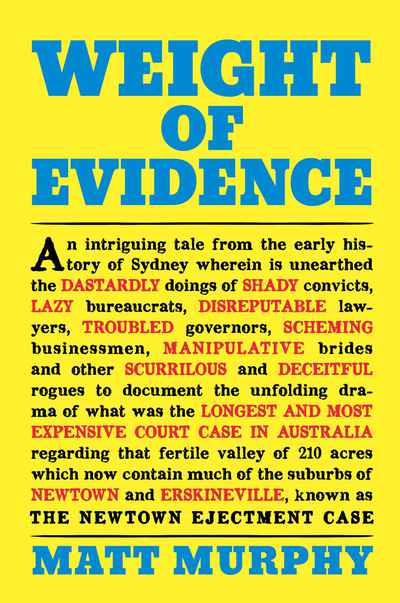 In 1794 and 1799 Superintendent of Convicts Nicholas Devine was granted 210 acres on the edge of the current CBD of Sydney. After the demise of Governor Bligh (to whom he was closely allied) Devine reluctantly retired to his estate where, as an old man living alone, he was constantly beaten and robbed.

An Irish convict named Bernard Rochford befriended the old man in 1825 and upon his death in 1830 forged a Will and seized control of the estate and proceeded to subdivide it and sell it off. Many of the purchasers (and others, including the Governor) knew Rochford was in no position to sell the land as even if the will he had was authentic, he was a nonetheless a convict and therefore was prohibited from holding property, let alone profit from its sale. Rochford sold much of the land in exchange for grog and was continually in court over a variety of issues. As devious as Rochford was, he proved no match for his wife whose deceit landed him in jail where he died in 1839.

The 30 new landowners included judges, mayors, magistrates, aldermen, newspaper editors, solicitors and other Sydney luminaries. They believed that with Rochford's death all suspicions regarding their ownership of the land would also die but that was not to be. In 1848 Nicholas Devine's heir John Devine arrived to lay claim to the entire estate.