Streets of Papunya: The reinvention of Papunya painting
Vivien Johnson 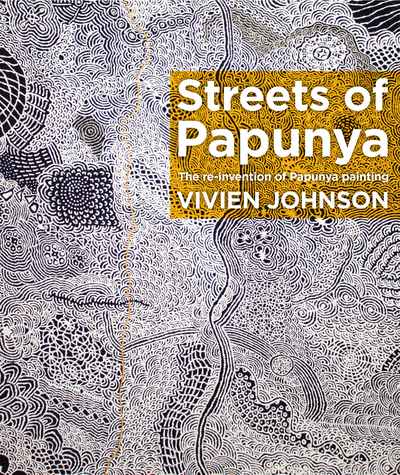 Some of Australia's most exciting contemporary art comes from the daughters of the ground-breaking Papunya Tula artists of the 1970s, the founding fathers of the desert art movement. Streets of Papunya is the story of the women painters of Papunya today, rising stars of a new art centre called Papunya Tjupi Arts. Among them are some of the first women in the desert to join the original Papunya art movement, who continue Papunya's rich history as the birthplace of contemporary Indigenous art. Western Desert art expert Vivien Johnson reveals the whole history of Papunya as a site of art production, from Albert Namatjira's final paintings, executed in Papunya days before his death in 1959, through Papunya's glory days of the 1970s and '80s, the dark time when it was known as 'carpetbagging capital of the desert' to its inspirational renaissance, as its leading painters reinvent Papunya painting for the twenty-first century.

'Read this stunning book, and your heart will soar for the genius of the Papunya story artists, memory makers and keepers of place.' - Alexis Wright

'This is the story of a wondrous renaissance: the rebirth of the painting movement where modern Aboriginal art-making began in the early 1970s, and is now flourishing once more - thanks to Vivien Johnson, who has made the advancement of Papunya and its people her life's great cause.' - Nicolas Rothwell