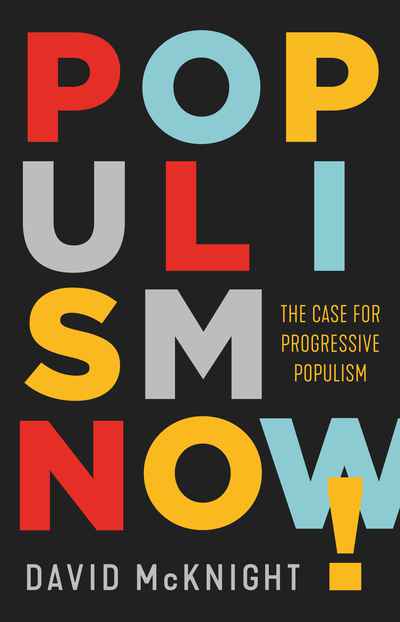 Populism can be a dirty word. Brexit and the election of Donald Trump have certainly given it a bad name. But rather than associating it with demagoguery and exclusion, might we better see it as a backlash against free market globalisation? Might it be harnessed as a positive force able to thrive in difficult times?

This timely and persuasive book exposes the failures of globalisation: greedy banks, predatory privatisation, corporate tax avoidance and a growing underclass of temporary overseas workers. David McKnight argues that a progressive populism could address the genuine economic grievances of everyday people, without scapegoating immigrants or ethnic minorities. In fact, a progressive form of populism may be the best way of defeating the racist backlash of right-wing populism. It may also be the best way to save the planet.

In a world where the super-rich get richer, one that is charged with hate-filled language as people look for someone else to blame, the case for progressive populism must be heard. This important book helps give it voice.

Read the extract in The Guardian here

'Populism Now! builds a strong case against the dominant economic policies of the past three decades, drawing heavily on recent journalism and reports. Much of this is familiar – the current banking royal commission underlines his criticisms – and his is a useful synthesis of the disasters wrought by uncontrolled privatisation and deregulation.' — Dennis Altman, The Sydney Morning Herald