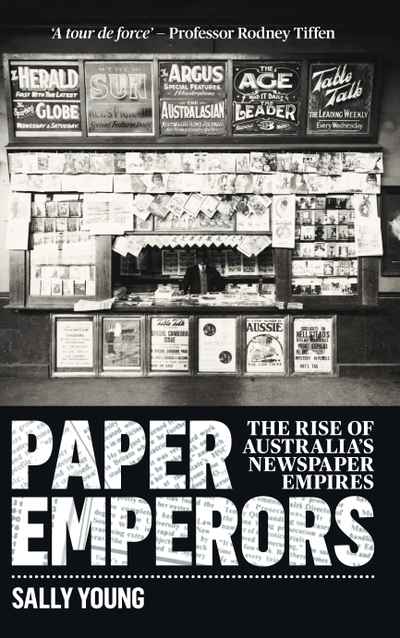 *WINNER of the 2020 Colin Roderick Award*

*Longlisted for the 2020 Stella Prize*

Before newspapers were ravaged by the digital age, they were a powerful force, especially in Australia — a country of newspaper giants and kingmakers.

This magisterial book reveals who owned Australia's newspapers and how they used them to wield political power. A corporate and political history of Australian newspapers spanning 140 years, it explains how Australia's media system came to be dominated by a handful of empires and powerful family dynasties. Many are household names, even now: Murdoch, Fairfax, Syme, Packer. Written with verve and insight and showing unparalleled command of a vast range of sources, Sally Young shows how newspaper owners influenced policy-making, lobbied and bullied politicians, and shaped internal party politics.

The book begins in 1803 with Australia's first newspaper owner — a convict who became a wealthy bank owner — giving the industry a blend of notoriety, power and wealth from the start. Throughout the twentieth century, Australians were unaware that they were reading newspapers owned by secret bankrupts and failed land boomers, powerful mining magnates, Underbelly-style gangsters, bankers, and corporate titans. It ends with the downfall of Menzies in 1941 and his conviction that a handful of press barons brought him down. The intervening years are packed with political drama, business machinations and a struggle for readers, all while the newspaper barons are peddling power and influence.

An 'exceptional book…masterfully achieved.' — Inside Story

'An invaluable volume.' — The Age and Sydney Morning Herald

'Better than a crime novel or work of fiction.' — Blue Wolf Reviews

'The best narrative of the power of the press seen for a long time.' — Otago Daily Times