Coming of Age in the War on Terror
Randa Abdel-Fattah 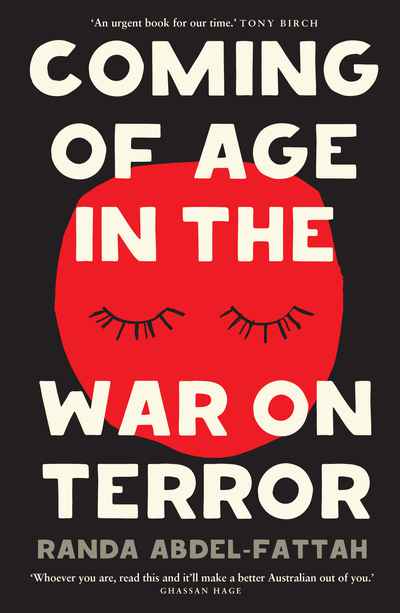 We now have a generation – Muslim and non-Muslim – who has grown up only knowing a world at war on terror, and who has been socialised in a climate of widespread Islamophobia, surveillance and suspicion.

In Coming of Age in the War on Terror, award-winning writer Randa Abdel-Fattah interrogates the impact of all this on young people's political consciousness and their trust towards adults and the societies they live in. Drawing on local interviews but global in scope, this book is the first to examine the lives of a generation for whom the rise of the far-right and the growing polarisation of politics seem normal. It's about time we hear what they have to say.

'As one of Australia's most compelling cultural critics, Abdel-Fattah curates a precise and substantive account of the impact of 'terrorist discourse' on an entire generation. With heartbreaking pathos, she invites us into the minds and hearts of a generation of thoughtful and intelligent young Muslim and non-Muslim Australians from diverse social backgrounds. This ambitious project, comparable in its breadth to Ghassan Hage's seminal White Nation, is part cultural memoir, part empirical research essay and part historical record. Excoriating the hypocrisy of neoliberal social interventionist policies, Abdel-Fattah has given us a rich and important work, as moving in its sincerity as it is unprecedented in its scope.' — Daniel Nour, Books+Publishing

'Randa Abdel-Fattah's compelling work reminds us that the way the global War on Terror has been prosecuted lands like blows across the backs of Muslim communities — it is in the everyday, the mundane, but also in the structures of state. The book should be praised for its depth and breadth of insights into Australia, as we see contemporary Islamophobia in the shade of the War on Terror revealed.' — Dr Asim Qureshi, Research Director, CAGE (UK) and author of A Virtue of Disobedience

'Only someone like Randa Abdel-Fattah with her history as an academic, an activist and a novelist can produce a book like this: analytically sharp, anecdotally rich, politically relevant and beautifully written. Whoever you are, read it and it'll make a better Australian out of you.' — Ghassan Hage, Professor of Anthropology and Social Theory, School of Social and Political Science, University of Melbourne

'Coming of Age in the War on Terror offers a provocative critique of the failings of so much public discourse and scholarship on Islam which rarely bothers to engage the voices of Muslims at all. Full of sharp wit, the book attends as much to the hypocrisy and blind spots of the progressive left — including journalists, educators and intellectuals — as it does to right-wing fear mongers. In this accessible and deeply moving account she gifts the reader a unique window into the profound impacts of institutionalised Islamophobia on the everyday lives of ordinary young Australian-Muslims today. Her research subjects recount the suffocating effects of a world saturated by negative stereotypes of Muslims and the growing industry of 'well meaning' intervention programs targeted at young people in education settings. Yet these young people somehow bear the weight of these representations with humour, grace and resilience. As an activist, a prize-winning author of young adult fiction, and sociologist, there is no one better equipped than Randa Abdel-Fattah to bring their lives to our collective attention.' — Professor Amanda Wise

'Randa Abdel-Fattah has produced an urgent book for our time. Coming of Age in The War on Terror is a story of injustice against those who suffer because of prejudice and manufactured fear. It is a vital work about us, Australians. This book poses many questions that we must confront if we are to ever consider ourselves an inclusive society. With courage, intelligence and acute insight, Abdel-Fattah is asking that we think and act with thoughtfulness and not ignorance.' — Tony Birch