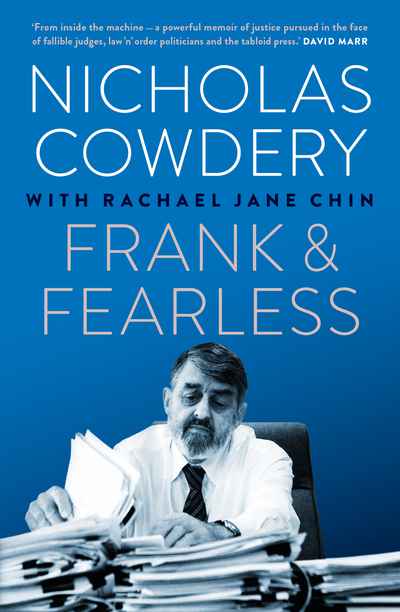 For sixteen-and-a-half years, Nicholas Cowdery was Director of Public Prosecutions for New South Wales. During this time, he immersed himself in the worst and saddest of human behaviour as he examined cases in forensic detail. And when he made unpopular decisions he had to reckon with criticism from politicians, media, victims, perpetrators and their families.

In Frank & Fearless, Cowdery reflects on some of the most notorious and difficult cases of his distinguished career, including the headline-grabbing criminal trials of Gordon Wood, Keli Lane and Jeffrey Gilham. He also writes about lesser-known cases involving drugs and voluntary assisted dying, and the need for law reform. All the while, he fights for a fair trial for all concerned. This gripping book reveals the workings of our criminal justice system from the inside.

'Frank & Fearless is not only the ultimate insider's account of some of the state's most sensational murder trials, it is also an account of one man's valiant battle against political and media forces to ensure that justice was done. Society owes Nick Cowdery a debt of gratitude.' — Kate McClymont

'From inside the machine — a powerful memoir of justice pursued in the face of fallible judges, law 'n' order politicians and the tabloid press.' — David Marr

'Nicholas Cowdery's candid and measured account of his more than 16 years as NSW Director of Public Prosecutions (basically deciding if the cases that come before him should go to court) is sobering, but a testament to his resilience in an extremely testing job…What comes through amounts to a portrait of admirably calm, considered deliberation at work.' — Steven Caroll, The Sydney Morning Herald