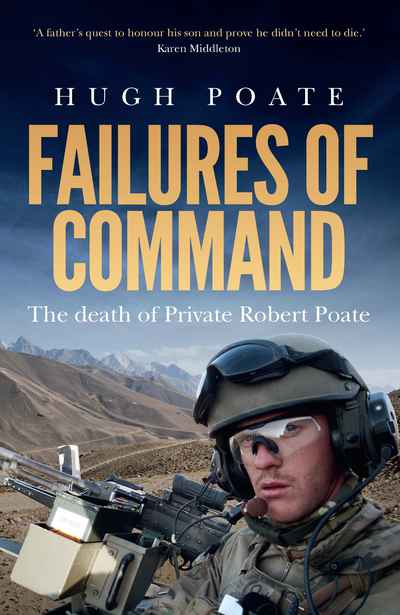 This is the story of our quest for answers and the shocking facts that emerged.

On 29 August 2012 Private Robert Poate, Lance Corporal Rick Milosevic and Sapper James Martin were killed during an insider – or green on blue – attack in Afghanistan. Their killer, a supposed ally, was a Taliban sleeper in the ranks of the Afghan National Army. Information provided to the families by rank-and-file soldiers after the event shocked them. And the heavily redacted internal investigation report excluded a plethora of potentially incriminating facts.

This powerful book is the result of a father’s quest to find out the truth behind the death of his soldier son. Hugh Poate’s search reveals a labyrinth of excuses, denials, half-truths, cover-ups, contrived secrecy, incompetence, negligence, orders not followed, and lessons not learnt.

Compelling and enraging, this story of the disturbing facts surrounding the devastating loss of three soldiers continues to reverberate beyond their families to the highest levels of the Australian Defence Force and Government.

‘Hugh Poate employs both microscope and blowtorch in examining what led to the murder of three young soldiers in Afghanistan. His research and analysis, dipped in unimaginable loss, is a father’s quest to honour his son and prove he didn’t need to die. His questions for Australia’s military hierarchy deserve proper answers.’ — Karen Middleton

‘Failures of Command is essential reading for understanding Australia’s war in Afghanistan and the way it was led. It shines an uncomfortable light on how the ADF works and converts a father’s grief into a searing examination of decisions made in wartime and the self-serving, self-defeating instincts to cover up.’ — Hugh Riminton

‘A powerful account of a father’s tireless battle against the military establishment to uncover the tragic mistakes before the murder of his son and other young soldiers during Australia’s longest war.’ — Andrew Greene

‘Hugh Poate brings the passions of a bereaved parent and the rigour of a policy analyst to this moving and disturbing account of his son’s death in Afghanistan and the way the Defence system dealt with it. He explores both the failures that led to this avoidable tragedy, and the system’s complacent and callous refusal to acknowledge and address them. This book tells us a lot about the hard realities behind the jingoistic flag-waving that manipulates the ANZAC legend while exploiting and endangering the young servicemen and women of today.’ — Hugh White

‘A heartrending account of the experiences of three families devastated first by avoidable tragedy, then by inexplicable interference in their search of answers, accountability and closure. Hugh Poate has ensured that the deaths of three Australian war heroes will not have been in vain. A must read for any young Australian contemplating military service.’ — Joel Fitzgibbon MP

‘Absolutely damning and confronting, Hugh Poate’sFailures of Command thoroughly examines the lack of command and leadership within Australia’s military and political hierarchy. Not only demonstrating the failures of those to whom we entrust our sons and daughters, Poate exposes brutal truths and the extent of incompetence, negligence and conspired actions that have been allowed to flourish and fester. This tragic story about the loss of Hugh’s son, Robert, must be read, remembered and reflected upon so we never again leave members of our military and their families with a legacy of anguish, destruction and abdication. May God help those military diggers who serve on our front line, because obviously, the nation’s military and political leaders will not.’ — Senator Jacqui Lambie