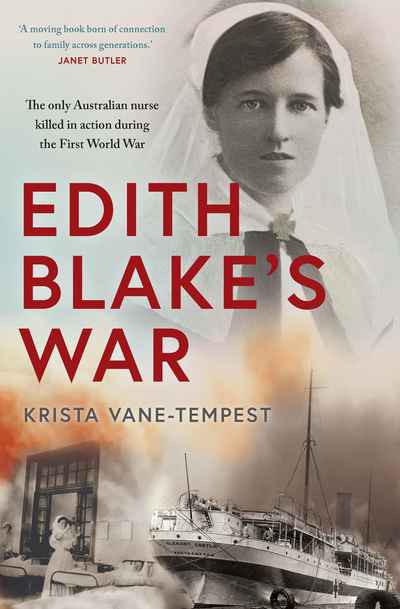 In the early hours of 26 February 1918, the British hospital ship Glenart Castle steamed into the Bristol Channel, heading for France to pick up wounded men from the killing fields of the Western Front. On board was 32-year-old Australian nurse, Edith Blake. Unbeknown to the ship’s company, a German U-boat lurked in the waters below.

When Edith Blake missed out on joining the Australian Army, she was one of 130 Australian nurses allotted to the British Queen Alexandra’s Imperial Military Nursing Service in early 1915. Her first posting was in Cairo where she nursed soldiers wounded at Gallipoli. In Edith’s remarkable letters to her family back home, she shares her homesickness and frustration with military rules, along with the savagery of the injuries she witnessed in the operating theatre. Later, at Belmont War Hospital in Surrey, she writes of her conflicted feelings about nursing German prisoners of war even as battles on the Western Front raged and German aircraft bombed England.

In Edith Blake’s War, her great niece, Krista Vane-Tempest, traces Edith’s gripping story, from training in Sydney to her war service in the Middle East, England and the Mediterranean, and her tragic death in waters where Germany had promised the safe passage of hospital ships.

‘Edith Blake’s story powerfully evokes the horrors and dangers of nursing during the Great War while capturing the poignant and special bond Australian nurses forged with Anzac soldiers. Krista Vane-Tempest deftly weaves the larger context of the war throughout Edie’s remarkable letters home and gives her the long overdue recognition her courage warrants.’ — Peter Rees

‘More than a biography, Krista Vane-Tempest has penned a tribute to the contribution and sacrifice of Australian women during the First World War. In doing so, she has rediscovered the evocative story of Edith Blake, nurse to the Anzacs and British troops and whose life was tragically lost in that terrible conflict.’ — Karl James