Domestic Herbal, The: Plants for the Home in the Seventeenth Century
Margaret Willes 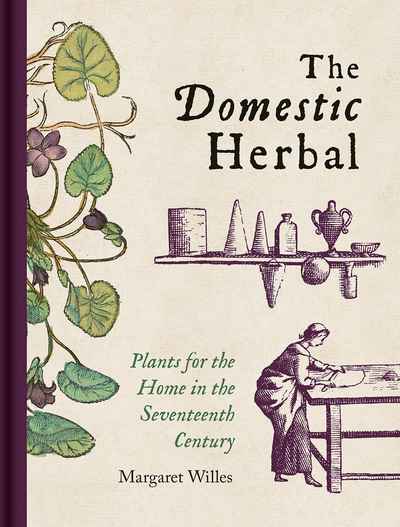 In the seventeenth century most English households had gardens. These gardens were not merely ornamental, even the most elaborate and fashionable gardens had areas set aside for growing herbs, fruit, vegetables, and flowers for domestic use. Meanwhile, more modest households considered a functional garden to be a vital tool for the survival of the house and family. The seventeenth century was also a period of exciting introductions of plants from overseas, which could be used in all manner of recipes.

Using manuscript household manuals, recipe books, and printed herbals, The Domestic Herbal takes the reader on a tour of the productive garden and of the various parts of the house — kitchens and service rooms, living rooms and bedrooms — to show how these plants were used for cooking and brewing, medicines and cosmetics, in the making and care of clothes, and to keep rooms fresh, fragrant, and decorated. Recipes used by seventeenth-century households for preparations such as flower syrups, snail water, and wormwood ale are also included. A brief herbal gives descriptions of plants both familiar and less known to today's readers, including the herbs used for common tasks like dyeing and brewing, and those that held a particular cultural importance in the seventeenth century.

Featuring exquisite coloured illustrations from John Gerard's herbal book of 1597 as well as prints, archival material, and manuscripts, this book provides an intriguing and original focus on the domestic history of Stuart England.