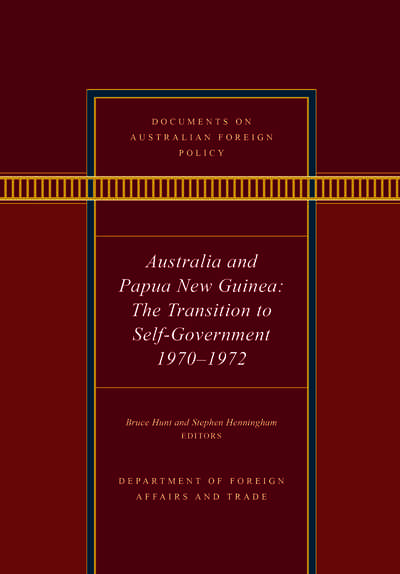 This volume, commissioned by the Department of Foreign Affairs and Trade in the Documents on Australian Foreign Policy series, is the first comprehensive survey of Australia's approach to the world in the 1920s.

DFAT Documents on Australian Foreign Policy, Australia and Papua New Guinea, 1970 - 1972 is the second of three volumes on on Papua New Guinea and its transition to self-government. This era saw monumental change in the relationship between Australia and Papua New Guinea as PNG went from a territory firmly controlled by Canberra to self-government in 1975. Documents outline the role of Australian Prime Minister John Gorton who quickened the pace of change following a visit to PNG by Gough Whitlam at the start of 1970, and the Australian ministers and officials who worked constructively with their PNG counterparts, including Andrew Peacock, at territories minister from early 1972.