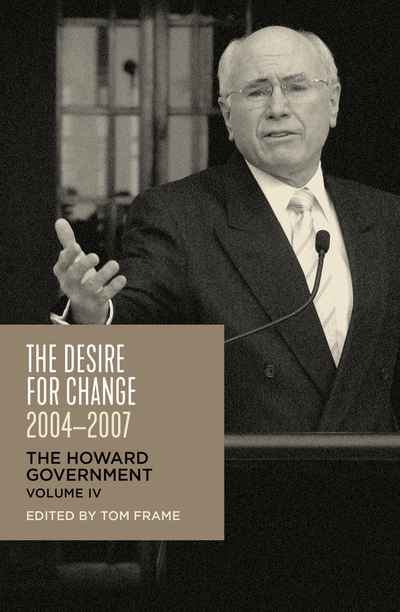 The Liberal-National Party Coalition was elected to office on 2 March 1996 and continued in power until 3 December 2007 making John Howard the second-longest serving Australian Prime Minister. This book is the final in a four-volume series examining the four Howard Governments.

Contributors to each of these volumes are asked to focus critically on the Coalition's policies and performance to reveal the Howard Government's shortcomings and failures. The aim of each of these volumes is to be analytical rather than celebratory (although giving praise where due), to create an atmosphere of open and balanced inquiry, including among those who contributed to the history being examined while making the most of the passage of time – that is, writing with the benefit of hindsight.

The fourth volume covers the period October 2004 to November 2007 and examines the Opposition leadership of Mark Latham, the Coalition's gaining control of the Senate, changes to the social welfare policy and provision, the advent of WorkChoices, the progress of Indigenous Reconciliation and the Northern Territory intervention, succession tensions between John Howard and Peter Costello, the 'Kevin 07' campaign, the election that saw the Coalition lose office and the Prime Minister his seat in parliament, and the longer-term legacies of the Howard years.