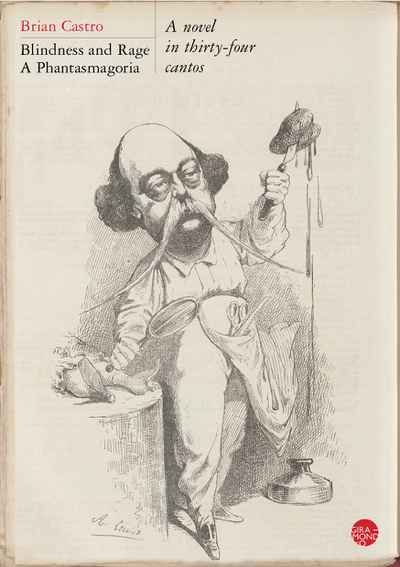 Winner of the 2018 Prime Minister's Literary Award for Poetry

Suffering from a fatal disease, Lucien Gracq travels to Paris to complete the epic poem he is writing and live out his last days. There he joins a secret writers' society, Le club des fugitifs, that guarantees to publish the work of its members anonymously, thus relieving them of the burdens of life, and more importantly, the disappointments of authorship. In Paris, Gracq finds himself crossing paths with a parade of phantasms, illustrious writers from the previous century — masters of identity, connoisseurs of eroticism, theorists of game and rule, émigrés and Oulipeans. He flees from the deathly allure of the Fugitives, and towards the arms of his beloved — but it may be too late.

Written in thirty-four cantos, Blindness & Rage recalls Virgil and Dante in its descent into the underworld of writing, and Pushkin's Eugene Onegin with its mixture of wonder and melancholy. The short lines bring out the rhythmic qualities of Castro's prose, enhance his playfulness and love of puns, his use of allusion and metaphor. Always an innovator, in Blindness & Rage he again throws down a challenge to the limits of the novel form.

Brian Castro is the author of the prize-winning Australian classic Shanghai Dancing, and recipient of the 2014 Patrick White Literary Award. His recent novels include The Garden Book and The Bath Fugues, both shortlisted for the Miles Franklin Literary Award, and Street to Street, loosely based on the life of the poet Christopher Brennan. He is Professor of Creative Writing at Adelaide University.