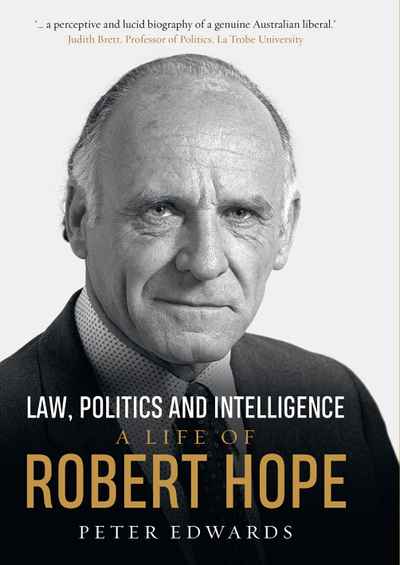 Robert Marsden Hope (1919–99), a NSW Supreme Court judge, shaped the structures, operations and doctrines of Australia's intelligence agencies more than any other individual.

Commissioned by three Prime Ministers to conduct major inquiries, including two royal commissions, Justice Hope prescribed the structures, legislation, operational doctrines, and national and international arrangements that would ensure Australia had agencies that were effective in countering threats to its security, while also being fully accountable to the government, the law and the parliament.

Not just a biography on Hope, Law, Politics and Intelligence also makes an important contribution to the history of Australia's environmental policies, adds significantly to the debate on judges acting as Royal Commissioners, and contains new insights into the appointment of High Court and Supreme Court judges, as well as the dismissal of the Whitlam Government.

This landmark biography is a groundbreaking account of the life and times of a man who shaped the way our intelligence agencies have operated for four decades.

'Peter Edwards has written an informative and perceptive account of his life and work. It is a pleasure to read.' – Murray Gleeson AC QC