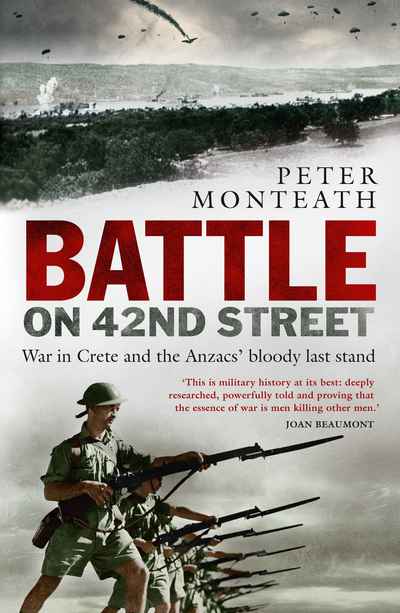 At what point does the will to survive on the battlefield give way to bloodlust?

The battle for Crete was at once the most modern and the most ancient of wars. For a week Australian and New Zealand forces were relentlessly hammered from the skies by the Luftwaffe and pursued across Crete by some of the most accomplished and best equipped forces Hitler could muster.

On the morning of 27 May 1941, however, all that was about to change. When a unit of German mountain troops approached the Allies' defensive line — known as 42nd Street — men from the Australian 2/7th and 2/8th Battalions and New Zealanders from several battalions counter-attacked with fixed bayonets. By the end, German bodies were strewn across the battlefield.

Acclaimed historian Peter Monteath draws on recollections and records of Australian, New Zealand, British and German soldiers and local Cretans to reveal the truth behind one of the bloodiest battles of the Second World War.

'This is military history at its best: deeply researched, powerfully told and proving that the essence of war is men killing other men.' — Joan Beaumont